Instrument plans that are available on the internet free of charge. Please add any that you find here. 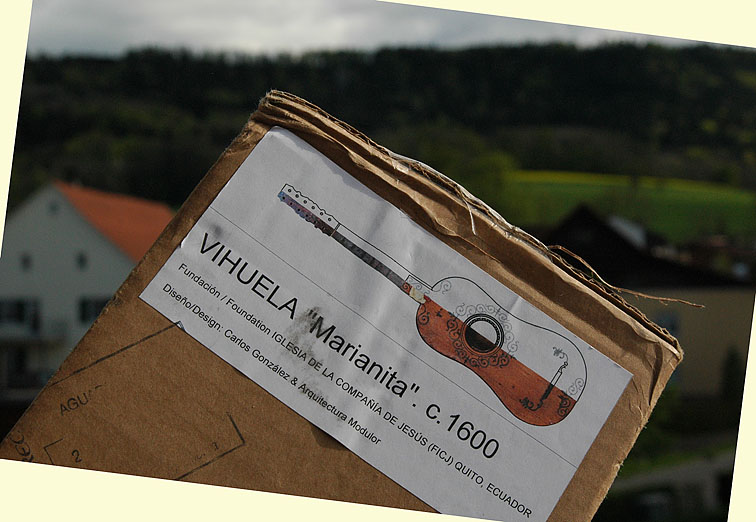 Back in November 2010 the Spanish luthier Carlos González made a trip to Ecuador to study an examine one of the world's oldest preserved guitars, one of the three known existing vihuelas, the Vihuela of Quito to be more precise.

The Vihuela of Quito, Relict of Saint Mariana de Jesús is guarded by the Foundation Iglesia de la Compañía de Jesús in Quito. Its overall length is comparable to the one of a modern classical guitar but its lower bout is only 270 mm wide. The string length (nut position to bridge of the current instrument) is 727 mm.

The luthier of this vihuela, and even the place where it was built are unknown. But González' recent investigation which included not only measurements and photographs but also radiographs (X-rays), micro-probes of wood and dendrochronological analysis revealed some very interesting facts. For example, the ribs are made of beech (Fagus sylvatica), the bass-side rib at some time having been doubled up with a cedar (Cedrela spp.) rib. The back, top and the soundboard braces are made of some kind of pine (Pinus spp.).

A few weeks back Carlos González published the first results of his investigation. There is now a plan available (50.- Euros plus shipping) which I had ordered using the contact information on his website http://www.luthier.org

The plan features three sheets, all at 1:1 scale This vihuela has been studied and measured at previous occasions by others, but to my knowledge González is the first one who published plans of it, and without any doubt he also has pushed the investigation about this exemplar (and maybe about the vihuela in general) a great step further, which makes obvious why some old and very rare instruments should not be restored at any price back to playability. Each repair means a loss of information which maybe at the moment can not be obtained but should be left to discovery for a future occasion when, for example new technologies are available. In any case, those very old instruments will never sound the same as they did centuries ago, an a good replica will do a much better job on reconstructing the original, ancient sound.

Carlos González told me that he is working on a small bilingual (Spanisch and English) book about the Quito Vihuela and its relation with the other (two) existing vihuelas which are the "Guadalupe" and the "Chambure", about both of which he had worked previously. I am sure he has to tell some interesting details about the construction and history of this unique instrument, and I am impatiently looking forward to the publication of this "small book" as he called his project in process.
Markus

To be stupid is like to be dead. Oneself will not be aware of it.
It's only the others who suffer.
Top

Re: The Quito Vihuela (Marianita)

But can you play "Stairway to heaven" on it and would it sound just like the record ?

Thanks Marcus, 50 Euro's is a fair bit, time you convert to south pacific peseta's (NZ Dollar) but for such detailed plans of a true one off could be worth keeping in mind

"Jesus Loves You."
Nice to hear in church but not in a Mexican prison.
Top

Re: The Quito Vihuela (Marianita)

Nick wrote:But can you play "Stairway to heaven" on it and would it sound just like the record ?

No, it's the other way round: because that axe belonged to Saint Marianne the record of "Stairway to Heaven" surely sounds exactly the same as this vihuela used to sound four centuries ago!

no need to convert the "Teuro" to some other currency ("teuer" is the German word for expensive), 50 Euros (plus shipping!) always means a deep plunge into our pocket when buying something we don't need desperately, even when living and working in Switzerland (no Euro here either, BTW).

At least to me, this instrument plan is more than just a plan, it is also a piece of art and dedication, and a piece of guitar history. Even if I hadn't bought these almost 3m² of meaningful paper: only to know the plan exists would make me feel good!

To be stupid is like to be dead. Oneself will not be aware of it.
It's only the others who suffer.
Top
Post Reply
3 posts • Page 1 of 1

Users browsing this forum: No registered users and 1 guest